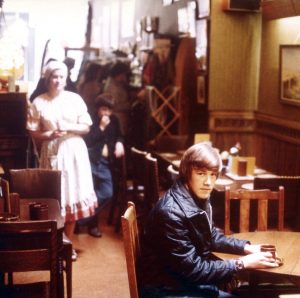 That’s when I lean out of the window and put my hand on the purse.

The boy looks at me and there’s a flash of recognition. Not that we know each other or anything, but everything is understood in that moment, who we are and where we come from.

We’re almost holding the purse together now, both supporting it, although he could easily take it from me, wrench it free and be gone. I could let him have it too. What does it matter to me if the boy takes the purse, just a few bucks and a bit of plastic? It’s no great loss.

But we both know that isn’t going to happen. Everything is unfolding too fast for us to think about it, other forces moving in, taking over, dictating to us. Nobody will give up the purse now, even if the boy takes it and runs. There’s too much at stake.

The people in the bus queue are turning to stare at us, as if somehow we’re responsible for the popping of the bubble wrap. If the boy lets go now, he can escape…

Very gently, he releases his grip on the purse, like dropping something from a great height, and then he’s gone. The bus queue quickly reforms and by the time I give the purse back to the mother with the baby, the moment has passed and the waitress is already bending down to pick up the pieces of the broken cup.

This piece was first
published in Overland 157