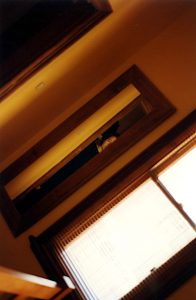 The estate agent is waiting for us at the house. She is excited. It’s a real cutie, she says, a deceased estate so sure to sell cheaply. This is a nice suburb.

The estate agent turns the key in the lock and opens the door. We go in and stand in the hallway. We see a man standing in the doorway of one of the rooms. He is putting on his clothes.

The estate agent says, I thought the house was empty. Who are you? The man says, I am a friend of the family. They asked me to come over and check on the house.

The estate agent walks back towards us. We are still standing in the hallway by the front door. The hallway has polished floorboards. I’m sorry about this, she says quietly. It will only take a moment.

Another man pokes his head out of the doorway. Hello, he says. This man has a cheerful smiling face. He is fully dressed. There are two of you, says the estate agent. Yes, says the first man. He is putting on his shoes without undoing the laces.

We continue to stand in the hallway. We inspect the front door. Soon the two men are ready to leave. We stand aside to let them out. The hallway is narrow. There is barely enough room for the men to pass by. See you later, says the man with the smiling face.

The estate agent shows us around the empty house. It has some nice features but insufficient storage space. Nobody says anything. Nobody looks at the bed.