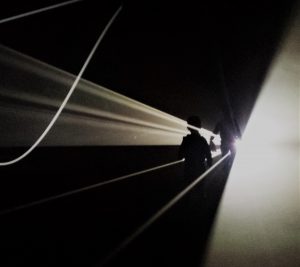 One day we’re sitting at a T-junction, waiting for a break in the traffic. A car pulls up in front of us, getting ready to turn into our street. It’s a manoeuvre that requires perfect timing and judgement.

Me and Kurt watch the car.

Eventually the driver spots a gap and starts to make his turn. He doesn’t look at me and Kurt. He’s too busy thinking about his driving.

When the car is about halfway across, Kurt leans over and points at the driver. He starts to scream and shout. He’s very excited. He makes my car rock. I’ve never seen him so worked up. Not about driving anyway.

The other driver catches sight of me and Kurt. He sees the shaking car. He sees Kurt, a wild-eyed, red-faced maniac yelling abuse at him. First impressions are so important.

For a moment I think the driver might stop in front of the on-coming traffic. But he doesn’t. He’s got somewhere to go. A little squeal of his tyres and he’s gone. I can still remember the look on his face.

From that day on, Kurt’s only wish was to sit at junctions and wait for turning cars. It got him going like nothing else. It wasn’t his fault. I guess I didn’t help much.

One night we’re sitting at a junction when we see this car turning towards us. Kurt starts up. It’s dark and we can’t see the driver but that doesn’t matter. The car’s headlights wash over Kurt’s face pressed against the windscreen.

The car turns the corner and drives off. I’m watching it in the rear view mirror. I see the brake lights come on. I see the car reversing at high speed. It stops beside us and a man gets out. He is a very big man.

The man opens my door and leans in, grabbing hold of my steering wheel. His hands are huge. They look as if they could snap the steering wheel like a pretzel. The man looks at Kurt and says: Were you talking to me?

Me and Kurt say nothing. The man says: Perhaps you were talking to your friend here. Is that right?

The car seems very full. I can hear Kurt breathing heavily. Out of the corner of my eye, I see him give a tiny nod.

That’s good, says the man. It’s nice to have someone to talk to.

The man lets go of my steering wheel. He gets into his car and drives away.

Later on, me and Kurt talk about what happened. We decide not to go driving again.