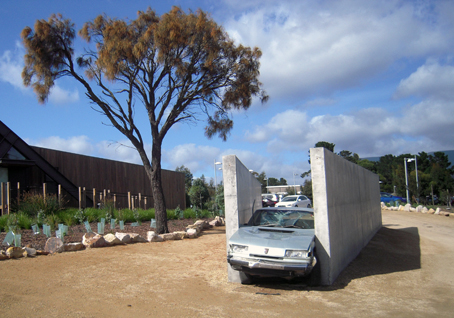 On the first day I visited the Museum of Old and New Art (MONA) in Tasmania, the fire alarm went off. Visitors were forced to congregate outside in the drizzle while the building was evacuated. As more and more visitors turned up expecting the museum to be open, they quickly filled the small café, cramming together around the long table. As such, it provided a good opportunity to assess the sort of people who are drawn to MONA, perhaps the newest and most remote, geographically-speaking, modern art gallery I’ve visited.

The preponderance of grey hair and glasses in the café and outside confirmed that MONA has quickly established itself as a destination de rigeur for retirees, certainly for those touring Tasmania (and I guess, for a lot of people, Tasmania is a place that falls into the ‘When I retire…’ category). I can even imagine people making the trip from the mainland especially to see MONA, or maybe it just tips the balance, offers one more, decisive reason to take in Tassie.

Alongside the grey army, there was a smattering of arty-looking types as can be witnessed at any inner-city opening in Sydney or Melbourne. These visitors, too, looked like they’d made the trip especially, notwithstanding the large population of artists currently living in Tasmania. I visited a few weeks after the gallery opened so I imagine the local artistic population had already had a chance to look around and that this arty set comprised visitors who had planned a trip from inter-state. Just a guess though.

Noticeable by their absence though were any children. There were a few babes in arms but it was obvious that MONA is not a family outing (although this was a mid-week visit so maybe the weekends are different). MONA has been billed as an ‘adult theme park’ and that’s exactly what it is. It’s for grown-ups. Mature people.

MONA is one of the few galleries I’ve been to where I didn’t feel as if I was being talked down to, that there wasn’t this incessant need to infantilise the experience, make it accessible and easy to digest. The building itself is labyrinthine and spooky – impressively so – the work is often unsettling and a little scary. The digital handheld device loaned out to visitors is the only guide rope, tracking where the visitors wander and providing information about the artworks as and when required.

I loved being in a gallery where there are no notices or little signs to tell me what I’m looking at. Just the art. How novel.

The information contained on the digital guide can be a bit off-the-wall and tangential – there’s a lot of writing there, some of it quite oblique to the artwork – but so what? That’s part of the experience. At least it doesn’t patronise or try to ‘explain’. I like the random nature of it as befitting the overall ambience.

This is a gallery to get lost in, which I did. Its walkways and hidden doorways are designed to confuse and surprise. As far as I could tell, there was no theme or chronological story so it’s possible to be drawn to whatever shines most brightly or to the darkest corner, lured by discordant sounds and distant music – it’s quite a cacophony down there, a menagerie of art. It’s easy to see how some of the artwork has become a part of the building and, vice versa, how the building is integral to the experience of the art. Sod the neutrality of the white wall.

I liked the fact too that New art is mixed with Old art – ancient artefacts from Egyptian, Roman, Greek culture sitting alongside installations and video works. These objects are not presented as historical items or as representative of a dead culture; they are simply there. Sure, it’s possible to find out what they are and where they come from, thanks to the handy digital companion, but they are not interpreted or put into context as archaeological remnants and, as a result, they appear fresh and bedazzling. These are truly beautiful items – you can almost feel the imprint of the artist’s fingers, the way in which the object has been fashioned – and this creates a strangely transcendent sense of continuity between the old and the new.

The one part I wasn’t convinced about was the presentation of much of the painting and photography, hung as if in a salon with different pieces mixed together, almost haphazardly. It creates some interesting effects and cross-currents but somehow it reminded me of those art competitions at the Easter Show.

Much of the new art is of the ‘geddit’ variety. You come across it and it has that instant effect of ‘oh yeah, I geddit’ and that’s pretty much the full force of its impact. There’s not so much stuff that resists interpretation, makes it baffling and hard for the viewer. Even the confrontational stuff – especially these works – trade in that split-second reaction from the viewer, the instinctive, visceral response. After a while, this can become a little tiring. I hankered for a different emotional register – the humdrum, the everyday, the ordinary or low-key. This is art as sideshow carnival.

Having said that, it’s all pretty good. It’s apparent that David Walsh, the man behind MONA, is somebody who really ‘gets it’. More than anything, there is the sense that this place is the culmination of one person’s vision, drive and desire. It would never happen in this form if a committee had been set-up to oversee its implementation, guided by cultural objectives and key performance indicators. That’s what makes it so different to every other festival or public gallery which must kowtow to the deadening hand of the taxpayer. You might not like it but there’s no doubting the intent, the will to create here.

And I think that’s thrilling. That somebody has gone out and made pots of money and then used it to build something like MONA. What an achievement. It made me wonder about all those other rich sods, the mining magnates, the Packers and Murdochs who are always so quick to tell us what’s wrong with the nation and impose their worldviews on us. What have they ever created? No doubt they can point to umpteen bursaries and fellowships, new gallery wings and recital halls – but that’s not the same thing at all. That’s not creating a space, a building, a collection, an experience of such significance that it makes people want to go to Tasmania (well, more than they did before anyhow).

NB: Another good thing about MONA is that it allows visitors to take photographs and video of the artworks, which I did and thoroughly enjoyed. The Museum asks that photographs of the exhibits are not posted on blogs so I’ll respect that. I shot more video in this gallery than I’ve ever done before, which says something about the place as an experience, and one which I can now relive at home. 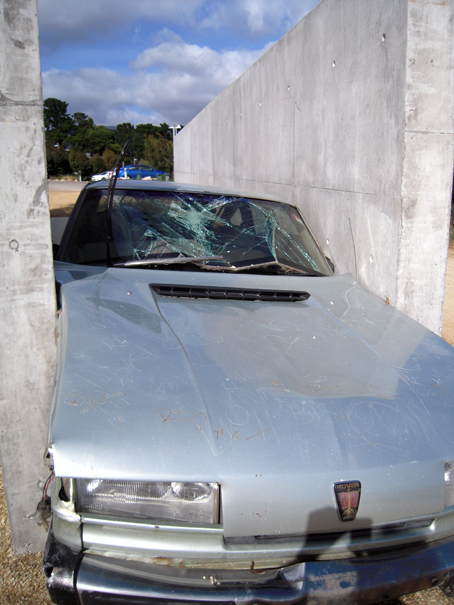 One drawback with MONA is that the entrance to the car park is just a mite too narrow. If they could just open it a little wider that would be great.