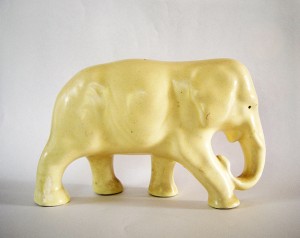 The whole rationale of the white elephant is that it should be utterly useless. Venerated, perhaps, but in practical terms a burdensome extravagance designed to ruin the recipient.

The modern usage of the term has lost that sense of veneration. It is no longer a sacred cow, so to speak, but merely a waste of money. Airports, dams, buildings and various military projects all wear the tag of being white elephants. The stench of incompetence and corruption is pervasive.

So, here is a white elephant: literally, although it has yellowed with age and is now more of a cream elephant with grimy patches, as well as symbolically in that it has no useful purpose, although I wouldn’t go so far as to say it is revered in any way and it can hardly be blamed for my downfall.

In its own way though – minuscule and barely acknowledged – it is a burden. I have carried this elephant ever since I first acquired it, moving it from house to house, shelf to shelf, occasionally dusting it – and to what purpose?

The idea of the white elephant is that having once acquired it – and no matter how much trouble it causes us – we can never get rid of it. To do so would be offensive to the giver as well as violating the sacred nature of the elephant itself. We’re stuck with it. Even the modern sense of the white elephant as a bloated and futile infrastructure project still carries that sense – ‘Oh, we can’t stop now, we’re in too deep, you’ll see, it’ll be magnificent…’ But, of course, it isn’t and never will be.

The other element though is that however much we may curse its existence, there is a sense in which we deserve the white elephant; after all, they are only given to those of a certain standing and character. Not everybody gets a white elephant. Sub-consciously then, perhaps we even want that elephant; look at me, I’m so powerful I’ve been given a white elephant in order to teach me a lesson. How good is that.

And that’s the thing with this one too. Not that I was given it or even deserved it, but rather that it is one of the few elephants I can actually remember wanting.

In a tiny corner of my memory there is a movie playing in which I am a small boy at the school Christmas fete. This was always such an exciting event, signalling the start of the annual sequence of fetes, parties and carol concerts that would lead inexorably towards Christmas morning itself, by which point we would all be practically fit to burst with anticipation.

Even the lead-up to the fete was exciting with the slow accumulation of jumble and cast-off goods arriving at the school, the preparation of the hall with trestle tables down the sides, the setting up of the tombola and lucky dip. Is it my imagination or did Santa come too, ensconced in a specially-decorated grotto off to one side? Perhaps the queues of people waiting outside for the doors to open on the day of the fete are another embellishment.

I can almost feel the sensation of squeezing in between the bodies massed in front of the tables, the scratchy fabric of overcoats rubbing my face, the smell of moth balls and damp wool. And that brief moment of triumph at finally making it to the front of the table where there were treasures to be found and pocket money to be spent.

I don’t know if any of this is true but in the absence of any contradictory evidence that’s my story and I’m sticking with it.

All I know is that I still have that white elephant, and every time I pick it up – smooth, cool, looking a little blotchy now (the elephant that is) – I can see that small boy who long ago, rather weirdly, mysteriously, decided he wanted an elephant from a white elephant stall.

I wonder now what happened to him? 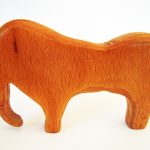 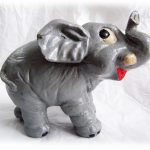