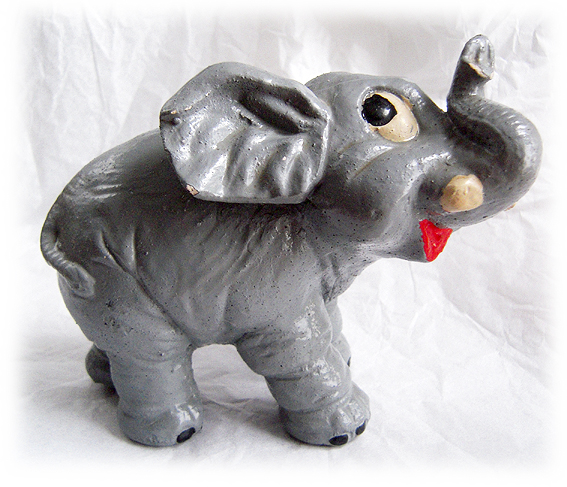 For anybody who sweltered through it, the summer of 1976 in the UK will always be remembered as one of the hottest and driest. Some say it was also a time when the English were happiest although that probably says more about the years that followed.

It was a summer in which parks and gardens were baked to dust, and people were forced to queue in the street to get water.

England cricket captain, Tony Greig, infamously said the visiting West Indies team would be made to ‘grovel’ in the dust. Instead we witnessed one of the defining moments of modern cricket as a tag-team of fast bowlers took turns to blast the English out. This pace battery and the extravagant batting that accompanied it, as well as the boisterous crowds that cheered them on, marked a sea-change in how the game was played and watched.

And it wasn’t just the cricket, the endless sunshine and blue skies that were different. The appearance of punk rockers on the streets and so-called race riots at the Notting Hill carnival seemed to herald a deep-rooted shift in society. There was something quite eerie and unsettling about it all, of which the weather was just a symptom (a pathetic fallacy no less). Nothing would ever be the same again.

It was also the year in which my parents decided to pack up the caravan and take our family on a ‘grand tour’ of the continent – the Low Countries, France, Switzerland and Germany – where the heatwave was likewise flattening everything in sight. It seems like a crazy-brave thing to do now – seven of us packed into a Volvo (or was it the VW campervan? I forget now) pulling a Sprite caravan, our home on wheels for several weeks – but back then there were no cheap flights to all points on the compass, not even a Chunnel. If you wanted to go, you had to drive there.

Fragments of this expedition remain with me now like involuntary flashbacks, as if recalling a particularly vivid dream, not even memories as such, just the same distorted images and vistas fluorescing time and again: the distant, bright peaks of the Alps, the dark rolling hills, slightly menacing, of the Vosges, the steep winding valley of the Rhine, the countryside everywhere disappearing into a blur of heat haze and dust.

I have vague recollections of odd sights, known only for being well-known – the Atomium, Arc de Triomphe – which I would visit later in life as if for the first time.

Then there are more vivid memories, noteworthy only because they appear so inconsequential and dream-like. In one, we are at a campsite in France somewhere and I am playing soccer on a field with some local boys with our shirts off, something we would never do in England.

In another, we have driven by mistake into an industrial area somewhere and ended up at a dead end. Realising he can’t reverse out, my father decides to un-hitch the caravan and turn it round manually. We sit in the car and watch him heaving and shoving, wrestling with the dead weight of the van. At this point, a local wanders by, perhaps curious to see what is happening or fearful that we might actually camp there, and my father, who didn’t speak French, exclaims rather wildly, “Polly vu on glay?”

Another one is remarkable because I know I wasn’t there to witness it but only heard about it second-hand from my mother. She is in the laundry room at a campground, washing clothes (as no doubt she must have done on a regular basis – it’s mind-boggling now to imagine the logistics of this trip for her, buying and then preparing food on a camp stove for seven people, keeping everybody safe and happy…) and listening to two young English women being rather ‘hoity-toity’, no doubt under the misapprehension that my mother is just a local French washerwoman unable to understand what they are saying. At this point, my younger sister wanders in and demands in a loud voice “Mum, can I wear my flip-flops?”.

Instantly the conversation between the two women falters as they realise they are being overheard by another English person – quelle horreur! – and no doubt judged in ways peculiar only to the English. Or as my mother later told my father, with evident satisfaction, “That shut them up”.

That I should remember this conversation seems extraordinary now, not least because I wasn’t actually there, and yet I can visualise it quite vividly – the stone sinks, the cool concrete floor, the cream-coloured walls of the laundry block with openings just below the eaves through which the golden light poured in…

Or maybe I was there and what makes it memorable is the disjunction between being there and then hearing my mother’s account of it later, the same incident as told from a different viewpoint and with a meaning understandable only to other adults, or to my parents at least. Perhaps a penny dropped then, the realisation that the world was slightly more wrinkled and knotty than what takes place between two teams on a cricket field (something which, even now, I am loathe to admit).

Anyway, all that is by-the-by.

The journey began, I think, with a ferry ride to Zeebrugge in Belgium and then onto Bruges and Brussels – who knows where? I’m making this up.

At some point, however, we stopped to visit the local market at Bruges, as one does, to stock up on supplies and regional produce. It was at this market, for reasons that continue to baffle me to this day, that I decided to outlay some of my precious spending money on this pottery elephant. It’s not a particularly appealing elephant in any way, I grant you; in fact it’s downright kitschy and absurd, but there you have it. I bought it from a market stall in Bruges. No doubt that Belgian stallholder still cherishes the memory of the day when those crazy English arrived in town to stock up on tat. Did anybody try to talk me out of buying it? Maybe, but perhaps even then they knew it was a forlorn hope trying to make me see sense about anything. Better just let him get on with it.

And so, having made my purchase early on in the trip, I then carried it with me all around Europe, south via Paris and across the parched fields of France, up into the Alps and down along the Rhine. The elephant went everywhere with me and, just as inexplicably, has continued to do so over the years and on many more journeys.

Why this should be so, I do not know. Perhaps some day someone will enlighten me as to why we keep some things while others we let slip carelessly away. 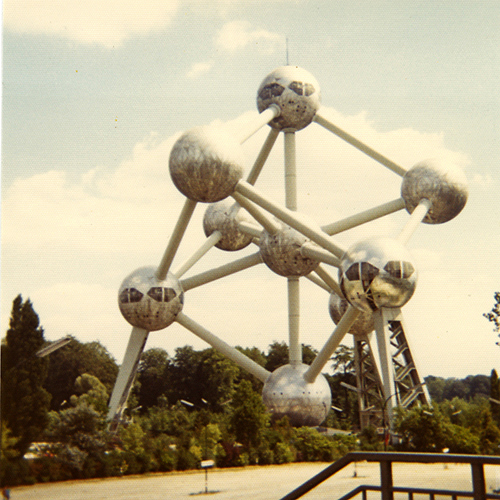 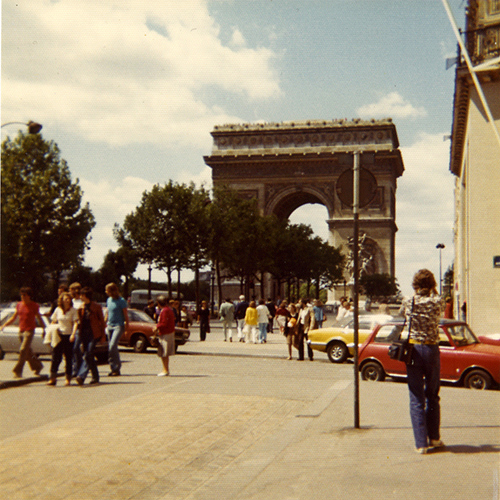 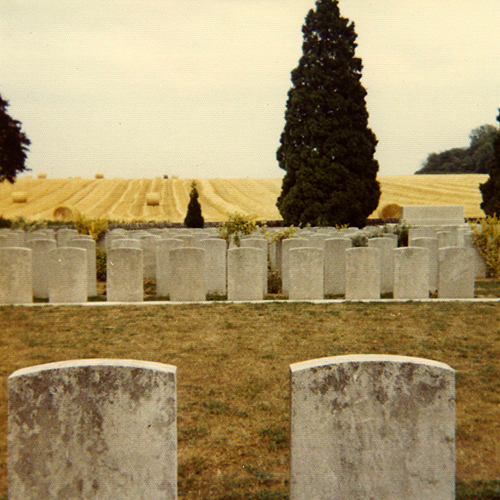 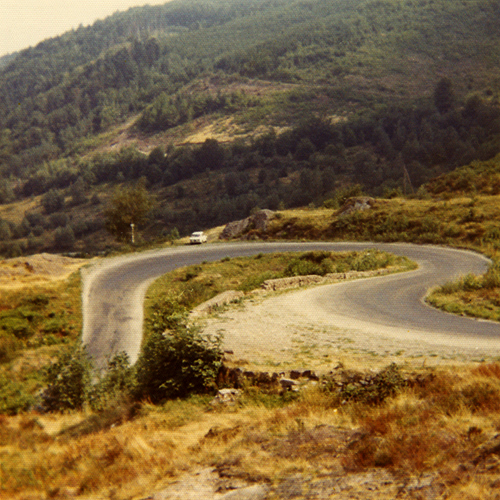 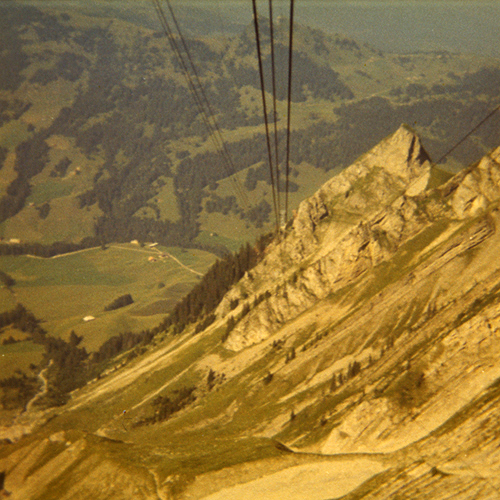 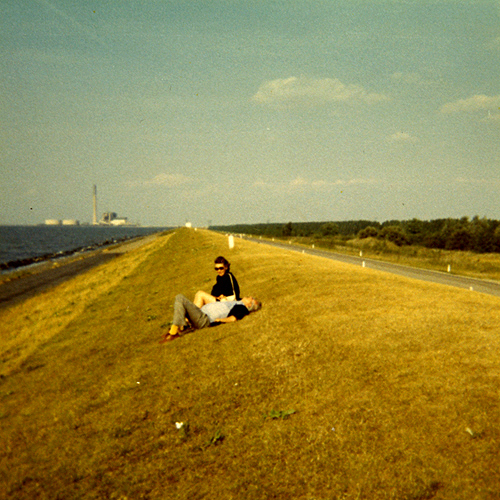