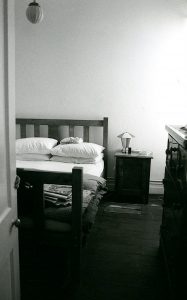 We’re lying in bed and she’s telling me about how she’s just arrived on an old steamboat at the trading post and it’s very hot and she’s wearing totally the wrong outfit.

Like it’s a real nightmare, she says, because I’m dressed like one of those Edwardian ladies or something.

I ask her if I’m there too and she says, yes, you’re the only other white person at the trading post and I’ve come all this way up river on the old steamboat to be your wife even though we don’t get on too well at first on account of the fact that we’ve both got too much pride.

Right, I say, but then I rescue you from a crocodile or a lion or something and you’re forced to admit that I’m not such a jerk after all.

That’s right, she says, except that comes much later, of course. First we’ve got to do lots of arguing and fighting and then you’ve got to admit to yourself that although you might not think you want a woman around the place, deep down inside you’re secretly glad to have one. You know, there’s nothing like the touch of a real woman and, my god, hasn’t it been a long time?

Yes, I say, it certainly has.

Anyway, she says, before you know it we’re in Monte Carlo and I’m waiting for you outside the hotel with a picnic lunch packed in a hamper. We jump into a little red sports car and head up into the mountainous hinterland, driving too fast along the Corniche, and down below we can see the Riviera all stretched out in front of us. It looks totally romantic.

And I’m still with you, I say.

Yes, of course you are, she says, because I’m trying to scare you by driving too fast and smiling a lot and you’re trying not to be scared. You’re pretending not to notice that I drive too fast even though, deep down inside, you’re secretly pleased that I do because you like a girl with a bit of spirit.

That’s true, I say, I really do like spirit.

Anyway, she says, I’m not sure if I can totally trust you so when we reach the lonely lookout and you come up behind me, I don’t know if you’re going to hold me in your arms or push me over the edge, you know what I mean?

Yes, I say, but then maybe I don’t know myself. Maybe I started out wanting to push you over the edge but once I held you in my arms, felt your body pressed against mine, I suddenly realised that I never wanted to let you go again.

Maybe, she says, but I’m not taking any chances. I’m convinced now that you’re trying to kill me although no-one else will believe me so what I’ve got to do is get myself a gun, any gun, and secretly train myself to use it so that when you finally catch up with me and break into my house in the middle of the night thinking that I’m completely defenceless, I can just shoot you dead. Die you motherfucker, I say, and, boy, you should see the look of surprise on your face.

You can’t do that! You can’t just gun me down in cold blood. What sort of world do you think we’re living in?

Listen here you asshole, she says, I can do anything I like. You’re the one who jeopardised this mission in the first place. If it wasn’t for you, I wouldn’t have to go back in there with all those creatures running around and risk my life to save you when all I’ve got is a couple of high-powered machine guns, a few grenades and a flame thrower. I mean, I’m totally on my own here. So don’t come whining to me about how unfair the world is and baby why don’t you give me one more chance because I don’t give a shit.

Of course you are, she says, except I’ve had just about all I can take now which is why I’m running through the streets of Manhattan and it’s snowing or something and I’m never going to see you again unless you run after me and stop me in the street and try to convince me that you’re sorry for what you’ve done but I have to understand that you’re just an ordinary guy who loves me and if - deep down inside - I still love you then why don’t we give it one more shot? And then maybe my heart will melt and I’ll come back to you.

We lie side-by-side in bed, thinking about the day’s events. I can picture myself running through the snow-filled streets, desperately dodging late-night shoppers – excuse me, excuse me, let me through please – and the sensation of the cold air on my face reminds me of an icy dawn in the mid-Atlantic, standing sleepy-eyed on the bridge as we toil across the slate-grey waves, half-expecting to be caught at any moment by the unseen U-boats, the wolves of the deep. And when it happens, there is a mad scramble for the life boats, the ship’s hooter going woop-woop like crazy, and, inevitably, tragically, somebody is called upon to make the ultimate sacrifice, disappearing slowly below the oily surface of the freezing sea.

All that seems like a long time ago now (although, strangely, just like yesterday) and I can’t help feeling a sense of nostalgia for the days when everybody knew who they were and there were no false endings. That’s what it seemed like at the time anyway. Nowadays, my identity is in a constant state of crisis, fractured, perpetually shifting and uncertain. No wonder I remain lying in bed, staring blankly up at the ceiling as a strong sidelight illuminates my profile. Soon I’ll get up and make my way to the kitchen where I’ll sit at the table, holding a glass of milk and listening to the slow tick-tick of the clock. That’s all I’m good for these days.

And no doubt she’ll reach out her hand in bed and, finding an empty space, follow me to the kitchen where she’ll take me in her arms and hold me and tell me that everything is going to be alright, and that I shouldn’t worry because, no matter what, she’s always going to be there to hold me. Then we’ll look at each other for a while and hold on even tighter and, if all goes well, we’ll get a nice easy fade through to morning.