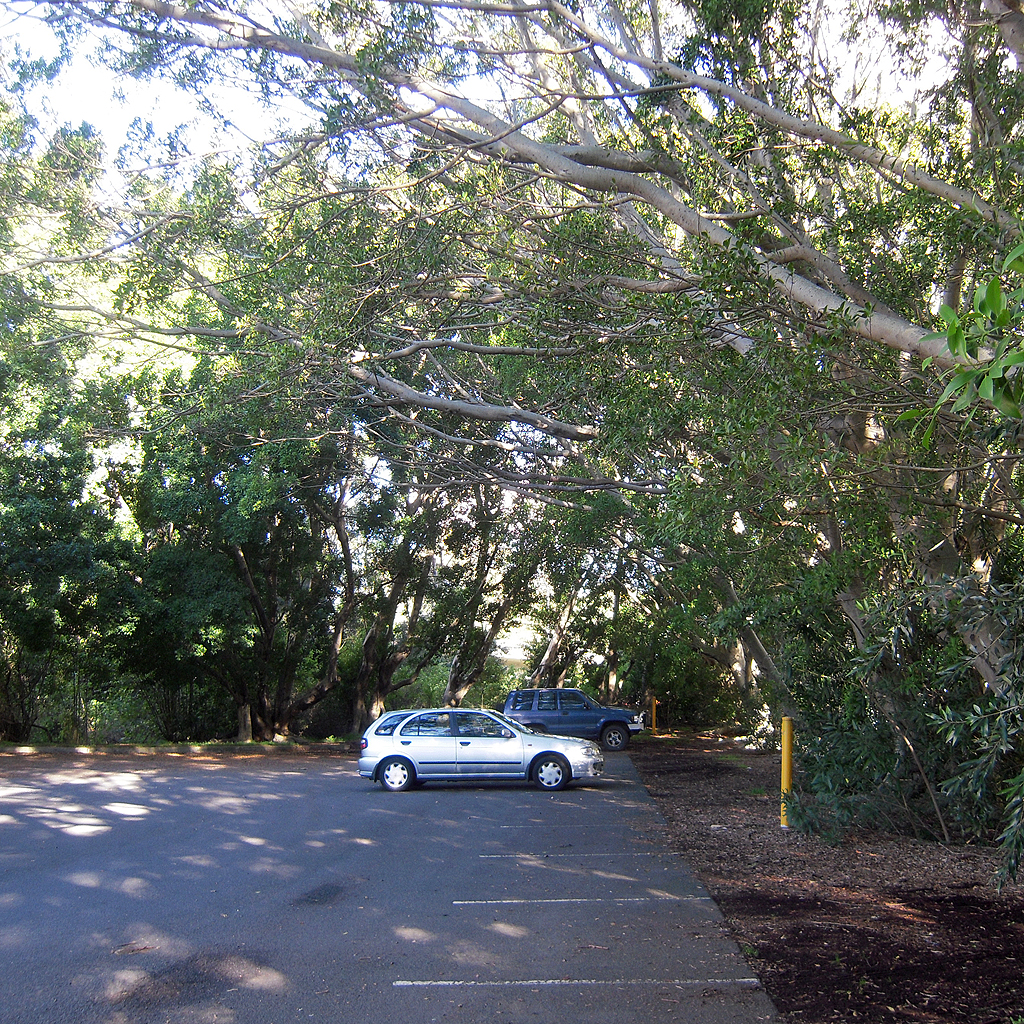 This is a melancholy place.

You may not know it nor feel it but there is a wry sadness here that lingers like mist in the valley.

Some places are like that. There is nothing tangible, nothing that you can put your finger on. It is like entering a cool room or stepping into a glasshouse. There is change in the atmosphere on an emotional level that is somehow external to me. It is not about how I feel but more like a presence that exists here, persistent, recurring, living between the branches of the trees, soaked into the dirt.

It is like that moment of being enveloped by sleep, not the same roller-coaster lurch but a shift nevertheless, a slide into something else.

In part it is the melancholy of transience, the great ineffable impermanence of life, the universe and everything. It is dense here, this coagulation of pity.

But why this place? It is just a car park, of course, one of those non-spaces wedged between a by-pass and a railway, a forgotten zone hidden away behind trees while, all around it, cars and trucks rush by and seemingly endless coal trains rumble past. You might call it an oasis in the midst of all this movement except that an oasis suggests a possible destination and a sense of respite, whereas this space resists any desire to linger. It is a transit point, a place where movement is suspended briefly but never ends.

Partly this is because it is also the car park of a fast food outlet – by definition a place where any unnecessary waiting is minimised – and one where most customers use the drive-through, barely coming to a halt at all. If they could somehow place an order and pick it up with actually stopping their vehicles, they would. The imperative to keep moving is almost greater than their need for food.

The result is that this empty space for parking seems ever more superfluous, a unwanted left-over, a relic of a different age when journeys needed to be broken. It’s doubtful that anybody would really miss it if it ceased to exist.

Stops along the way

It used to be that journeys were defined and shaped by their stops. When I was a child, deciding when and where to stop was an integral part of any long distance road trip. The journeys were drawn out affairs back then; the cars were slower, the roads narrower, the distances appeared greater. It was customary to pack sandwiches and a flask for a drive which, these days, would be regarded as little more than a daily commute.

At the same time, it was easier to simply stop by the side of the road on a whim, find a bit of shade, a grassy bank to sit on, a nice spot to have a picnic. It didn’t really matter where. Many of the photographs from when I was a child were taken by the side of a road. It was part the narrative of growing up. Everybody had their favourite place for lunch or morning tea. Good stopping places became legendary, the stuff of family myth, revered as destinations in their own right.

Many years and many journeys later, this place became our stop. I’m not sure how it happened or when it began. We had other stops, some of which we used for years, but eventually they fell by the wayside and this became the one – the one-stop.

It was – and is – an anonymous space. I don’t think we ever called it anything. “Shall we stop in the usual place?” might be all that was said, and frequently not even that. We just knew that we had to stop somewhere and that this would be the place.

It was never full. At most there might be one or two other vehicles already parked, respectfully keeping their distance. The space had a knack, perhaps a trick of the light filtered through leaves, of making all the vehicles look mysteriously abandoned, as if their occupants had wandered off and forgotten to return.

It was like an anteroom to another dimension. I can imagine there being a rift here, a pulling back of the curtain to reveal a timeless space, a temple to eternity.

All these factors – the location, the atmosphere of redundant neglect, the empty uselessness of it – combined to imbue it with a melancholy air. Tucked away out of sight around the back of the restaurant, lost in a perpetual gloom, it seemed to envelop anybody who ventured there in its spell of sweet sadness.

There are other reasons though why, for me, this banal, nondescript place manages to hold such powerful emotions, as if they have pooled here, stilled and silent, waiting for me to wade into them once more.

For more years than I can remember, this was our final stop on the way home from our summer holidays. Up until this point on our journey, we were still away, slowly stretching the holiday bubble as far as it would go, making it last.

After this point we were always only heading home, one final non-stop dash back to the city and the resumption of normal life. It was the stationary fulcrum of an emotional Doppler effect; freeee-dom, freedom, free… drud, drudge, drudgery…

It was a space of transition then from one state to another, from temporary liberty to predictable routine, from carefree to careworn, from living to existing. It was like awakening from a dream too soon and, in the last despairing moments, clinging onto its disappearing vapour trails, keeping it alive by refusing to accept it was all over.

Were we waking up or falling into unconsciousness? Were we recalled to life or merely sleep-walking?

The melancholy space is unsettling, ambiguous, neither one thing nor the other. We can luxuriate in its sense of otherness but it is not space in which to linger. In order to preserve the spell, we must leave it behind.

No place no more

This place is gone now. Not that it was ever really there anyway. It was always a non-space.

Of course, the physical locale is still there but the fast food outlet has closed and the car park is fenced off, a ring of wire placed around it to prevent any passage. It is still possible to stop there outside the boundaries, if you wish, perhaps for old times’ sake, but now the air of melancholy is one of abandonment. It is a place of no return.

In time, the expressway will be re-routed, the relentless coal trains will stop running and nobody will pass by. A space which never really existed will disappear into memory, preserved here and there at random, before eventually being erased, the slight, subtle accretions of time amounting to practically nothing.