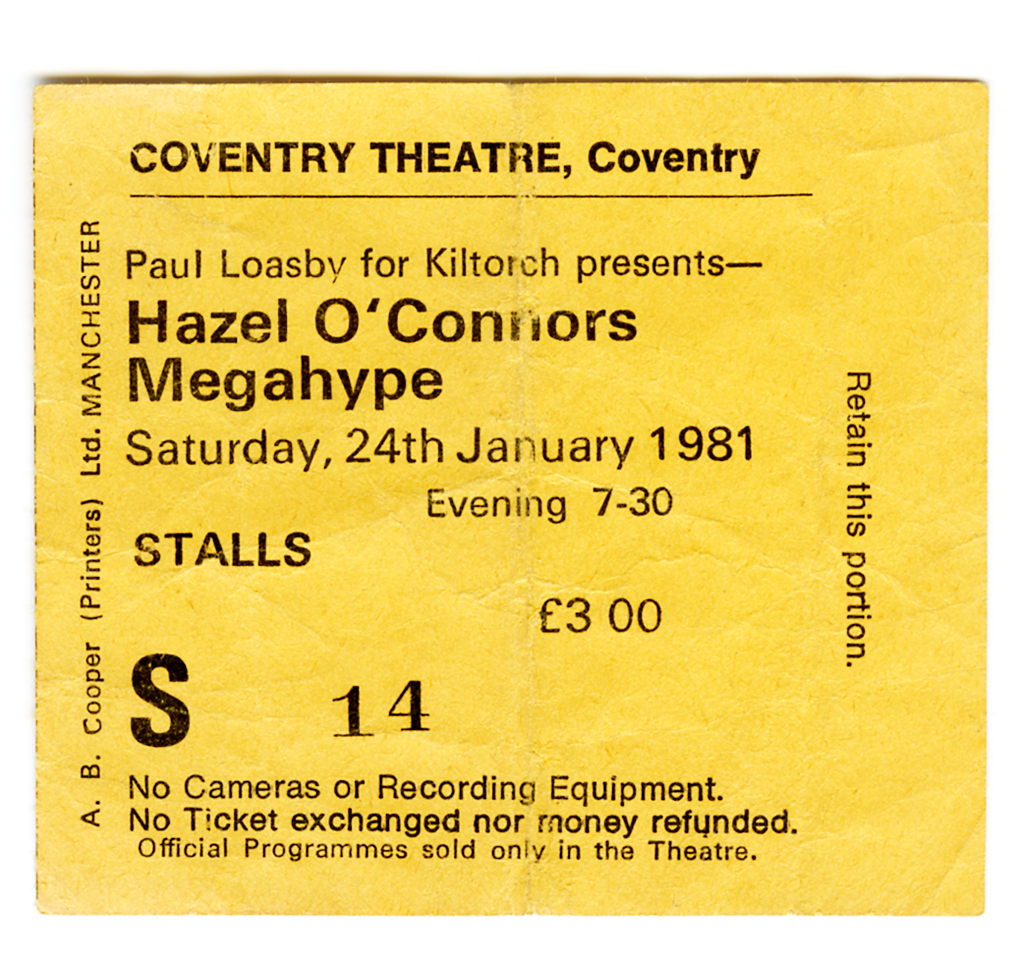 This is one of those random events that leave a smear of residue, a small fluff ball of memory that clings to the fabric of life when so much else is washed away. And for no real reason; no extreme of emotion or passion, no brain-expanding epiphany or stomach-churning realisation. There is no explanation as to why this lingers in the dimly-lit past, but it does.

For instance, I cannot recall what I was doing in Coventry on a Saturday evening in January, let alone why I should have gone to a Hazel O’Connor gig. I think I must have been visiting somebody, possibly at a nearby university or college, and this just happened to be on. The only gig in town, I presume.

I was not a Hazel O’Connor fan. I remember she had one big hit – Eighth Day – with a distinctive Tron-like video from the film Breaking Glass that was catchy at the time, perhaps more so now. She was part of that post-punk/new romantics transition phase, alternative but a bit poppy; the support band for part of this tour was Duran Duran who were on the verge of breaking through to become the next big thing. Perhaps the worst thing you could say about Hazel O’Connor is that she helped give us Duran Duran.

Anyway. I went. I seem to remember that Eighth Day featured fairly prominently.

And then, during the encores, something unusual happened – not so unusual really, but it stuck in my mind.

People in the audience were calling out song titles for her to sing and a teenage girl down at the front (it was a mixed crowd, students and teeny-boppers) was pleading for Eighth Day again. O’Connor heard her… and I have this vivid memory of her bending down to address the girl and explaining that she couldn’t sing it again because her voice was going and it was too much of a strain. She seemed quite distraught that she couldn’t do what the fan wanted and, in that moment, the delicate, symbiotic relationship between performer and fan was exposed, the fan offering adulation so long as the star performs.

It is the performance which sparks the adulation which in turn draws forth the performance, demands it with a hunger that can never be truly sated. I don’t suppose I’d ever thought about it up until that moment. Pop stars just performed and that it was it; it never occurred to me there might be a reciprocal obligation.

I can’t remember what happened next, whether or not she really did sing Eighth Day again but I like to think she did.

And that’s it. That’s basically all that I can remember.

There is a magic in performance that takes people out of themselves, creates something that surpasses understanding. And then there are those ruptures, the unexpected breaks that dispel or suspend the shared fantasy for a moment and expose what lies beneath.

I was fortunate enough to see Gil Scott-Heron perform a couple of times and he was colossal performer, able to reach out and envelop a crowd with his voice, his anger, his humour and humanity. Seeing him live was certainly an unforgettable experience.

And yet when I think of him, one incident immediately comes to mind at a gig where he was performing, I think, at Camden Lock. At one point halfway through the concert, he realised that he was missing a ring on his finger so he stopped the concert, explained that the ring had great sentimental value for him and asked if we would all have a look for it.

And so the lights went up and we all shuffled around a little bit until, remarkably, somebody found the ring on the floor. The ring was returned, the lights went down again and Gil Scott-Heron played on.

It was a meaningless interlude, insignificant, and yet for a brief moment we were all united in looking for this ring – not performer and audience but just a bunch of people searching for something. And when it was found, normality reasserted itself – wonderful, inspiring normality but still… normal.

And so, for better or worse, that’s what I remember, and there are others too – Oscar Peterson in Berlin upbraiding a member of the audience for taking photographs, a truly menacing Mark E Smith bearing down on a fan who encroached too closely onto the stage of Hey! Luciani at Hammersmith – moments when the fourth wall cracks in unexpected ways and impromptu encounters intrude, trivial and banal though they may be.

It is around such bits of grit that memories accrete.