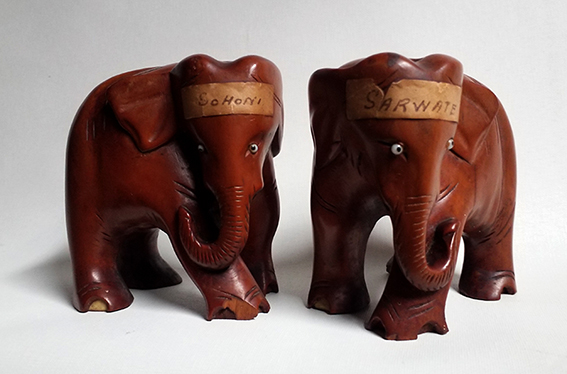 According to the labels stuck on their foreheads, these two small elephants are called Sohoni and Sarwate.

Ranga Sohoni and Chandu Sarwate were Indian cricketers who both made their Test debuts in the same match against England at Old Trafford in 1946. They also played domestic cricket together, most notably for Maharashtra when it won the Ranji Trophy in 1941, a year in which Sohoni scored the most runs for the season and Sarwate took the most wickets.

It’s an intriguing thought then that the elephants were named by a keen Maharashtra cricket fan to celebrate the pair’s deeds on the field. You would do that, wouldn’t you? Take a pair of carved elephants and stick your heroes’ names on them. It’s a way of marking the occasion, trying to hold onto something special before it slips away into the mists of yesteryear. Like holding onto mini commemorative bats (tick) or old scorecards which record a particularly memorable day out at the cricket (also tick).

In 1979 I went to the one-day World Cup final at Lords in London between the West Indies and England. I don’t recall how I managed to get a ticket for the final or even how I got there, but I know I went by myself and it was my first and, so far, only trip to Lords.

In those days, before the installation of advertising hoardings and hi-vis security guards, spectators were allowed to sit on the ground just inside the boundary fence (not really a fence as such, more like a plank of wood). I sat on the grass in front of the main grandstand at about mid-wicket. When a fielder was sent into the deep to patrol the boundary, you could almost reach out and touch them. If you look at the highlights of the game now, it’s remarkable, too, how few ‘stewards’ there were to manage the crowd.

Matches involving the Windies back then drew a vibrantly boisterous crowd; excited spectators would regularly spill out onto the playing field at various times, such as when Viv Richards smashed a boundary, something which he did repeatedly that day. Today’s stadia micro-managers must break out in a sweat to see how easily and how frequently spectators stepped over the boundary rope onto the ‘playing surface’ in order to field a ball or dance a happy jig. By and large though, people were perfectly happy to sit and watch the cricket without being treated like naughty infants. At the end of the game, there was a pitch invasion, of course, but most spectators waited until the mad rush was over and then wandered over to inspect the pitch knowingly.

It was a warm day and, although not a particularly close game, a thrilling occasion embellished by some huge sixes – comparatively rare in limited overs cricket back then – not least from the irrepressible Collis King.

I don’t have a scorecard for that day but, some years ago, I was looking through one of my favourite cricket books, England versus Australia: a pictorial history of the test matches since 1877 by David Frith, and out dropped a small bag of grass clippings.

But then I remembered that, all those years ago, as I wandered over the sacred Lord’s turf after the game, I knelt down and plucked a few blades of grass as a holy relic – surely no-one would notice or care – and this was where they had been kept all these years, between the pages of the book. They are still there. They could be bits of dried grass from any old lawn for all that anybody knows, but, for me, they instantly transport me to that golden day at Lords, the excited surge of the crowd as the ball disappeared off in all directions with a loud gunshot crack, Viv Richards imperiously swiping sixes to leg almost at will, Geoff Boycott trundling into bowl with his cap on, and a remarkable running catch from Mike Brearley which seemed to take forever.

All of which is a long-winded way of saying I can understand why someone, whoever they were, might seek to enshrine the memory of two of their favourite cricketers by writing their names on two wooden elephants. It’s a talisman, like the ashes of burnt bails, that works its charm long after the who, why and when of its creation have become a forgotten memory.

How did I come to acquire the elephants? Well, that’s another story.