The young man in the sweatshirt and grubby blue jeans stands out amidst the genteel splendour of the opera house, an ugly intrusion like a foul weed in a bed of delicate perennials.

He stands at the rear of the stalls in the area set aside for those ticket-holders unwilling or unable to pay for a seat, self-consciously avoiding the amused looks of the well-heeled Viennese crowd filling the auditorium, masking his awkwardness by staring with great intent at the ornate furnishings and lights. If only those lights would dim quickly so he can stand anonymously in the darkness, shielded from the curious glances of the suits and gowns.

He looks pale and thin, barely old enough to be out of school, like a baby-faced tramp. It is as if he has wandered in from the set of a movie where children all play the parts of adults.

What is he doing there? The obvious answer is that he’s there to see an opera, possibly Don Giovanni although the details of the actual program are hazy at this distance. Strangely enough, it’s not as if he likes opera all that much but he’s here now, in Vienna, and he knows from his upbringing that going to the opera is one of the things that adults do.

A more complete answer is that he’s travelling north from Venice to Berlin and, according to the map of Europe he carries in his jacket pocket, Vienna is kind of en route, connected by the thin red lines of motorways along which he can hitch a ride. 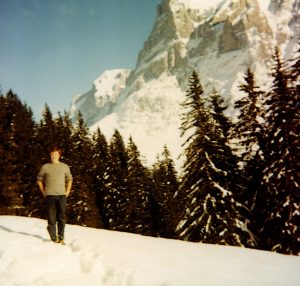 If only it wasn’t so stuffy inside the theatre. Everywhere in Europe is so over-heated – except for the hostels which are run more like ex-military camps. Already the lack of food and the warmth of the theatre are making him feel quite weak. He’s not sure he’s got the strength to stand up for – how long is Don Giovanni anyway?

He feels in his pocket for the few coins he has left for the remainder of the day. Perhaps he will allow himself an advance on tomorrow’s budget to get something to eat at the interval, although he knows what that will mean for the following day. Perhaps if he is on the road he won’t need to eat, or a kindly driver will buy him a meal at a roadside stop. It happens sometimes.