A comment from Clare on the previous article suggested that the Unknown Boys are the Toowoomba Grammar School cricket team and that FGP Barbour, the boy with the rather sad face reclining on a rug at the front, was killed in the First World War at Flers in France.

So let’s pull on this thread and see what unravels. No doubt there are many entry points into this photograph, many pathways to traverse it, some of which are easier to follow than others, but just as the photograph itself is a random find so it seems appropriate to follow whatever arbitrary connections and diversions are encountered along the way.

I could take a short cut, no doubt, and quickly get to wherever this is taking me – ie multiple textual threads connecting these people – but I’m not sure what that would achieve. Isn’t there some clichéd adage about the journey being more important than the destination? At this stage I’m going to dawdle deliberately by the wayside, steadfastly refusing to look at where this is going.

Having said that, let’s skip ahead a little bit anyway and maybe circle back later...

In the National Archives there is a folder containing the service record of Company Quartermaster Sergeant Frederick George Pitty Barbour who enlisted in the 25th Infantry Battalion on 3 August, 1915, when he was 20 years old. At the time, his ‘trade or calling’ was listed as student.

Judging by the portrait taken of him in uniform sometime around 1915, this does appear to be the same FGP Barbour as the reclining boy in our photograph, separated by just a few years. I think we can safely say this is the same person. 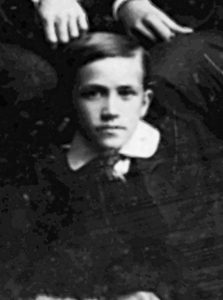 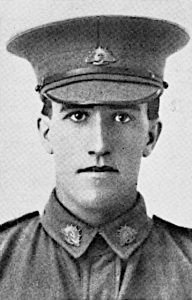 At the time of his enlistment, he is described as being 5 feet 6.5 inches tall, weighing 131 pounds with dark complexion, brown eyes and dark brown hair.

The adult FGP Barbour sailed from Brisbane on 30 December, 1915, on board the troopship HMAT Itonuus, transferring to the 9th Infantry Battalion and arriving in France in April the following year. He died on the Western Front on 25 February 1917 from wounds inflicted by a shell burst. Originally reported as killed in action, this was later amended to ‘died of wounds received in action en route to a field ambulance’.

Those are the bare facts of his war service spanning no more than 18 months from enlistment to his untimely end. He died just a month short of his 22nd birthday.

The army file traces this journey – when he joined, where he went, what happened to him - in pages of typed forms that testify to the vast administrative machinery of the war effort, everything recorded in triplicate, stamped, dated and initialled. Even after his death, the bureaucratic process rolls on with details of his burial, the return of personal effects and, years later, the delivery of medals, the King’s Message and Memorial Scroll. There’s even a record of a pamphlet entitled ‘Where The Australians Rest’ being sent to his father, GP Barbour, in 1921.

One wonders what this must have been like for the family in the aftermath of his death to receive these insistent reminders in the mail, impersonal form letters couched in a brisk, business-like tone: ‘forwarded herewith… as per inventory attached… I shall be much obliged… returning the enclosed printed slip’.

Beyond the administrative narrative of service dates, postings and promotions, however, the file also contains documents that hint at a more human story.

For instance, there is a poignant hand-written letter from his father asking for more information about his son’s final resting place and whether it would be possible for his ‘other son’ in England to erect ‘some form of headstone’.

Another short note from GP Barbour acknowledges the return of his son’s personal effects which included two coins, a note pad, a letter, photos and a bible. He regrets the delay in responding to the delivery, explaining that ‘Mrs Barbour’s severe illness caused the matter to be overlooked’.

I got that one Jack

The archive of the Australian War Memorial also contains a file relating to FGP Barbour and his death in France. In March 1917 , his elder brother, EP Barbour (another of the Unknown Boys), wrote to the Red Cross to inquire about the circumstances of his brother’s death. EP Barbour was the 'other son' who, at the time, was stationed in England as part of the Australian Medical Corp.

The Red Cross file contains a number of statements and witness accounts of the shelling incident that killed FGP Barbour along with several others. Some of the accounts are second-hand reports so the details vary according to how and where the witness got their information. In some reports he died instantly and in others he died later of his wounds.

One witness reports that his final words were ‘I got that one Jack’ before he slipped into a coma from which he never recovered.

The most detailed and perhaps authoritative account was provided by Quartermaster Sergeant Maddock of the 9th Battalion in a letter to the Red Cross, the gist of which was forwarded to EP Barbour. Describing FGP Barbour as ‘a particular friend of mine’, Maddock was present when the shell landed. He wrote:

On the evening of 25th February, all the Company Quartermaster Sergeants of this battalion were at a spot called Turks Dump about a mile west of the village of Flers. We were getting the rations ready for a party to take to the front line. Unfortunately a high explosive shell from the enemy burst right in the centre of the party, killing 11 and wounding 16. Poor Fred Barbour was wounded badly in the head and stomach. He was taken to a dressing station called ‘Edward’s Post’ and died shortly after.

Suffering from shell shock, Maddock was ‘not good for much for several hours' and did not see what happened to his friend until after Barbour was buried. Initially, he was buried nearby at ‘the junction of two roads and near some other graves’ but later his body was exhumed and transferred to Grass Lane war cemetery at Gueudecourt near Flers. Something must have gone awry in the process however as the army records show that his headstone bore the inscription: ‘Believed to be buried in this cemetery, actual grave unknown.’

The Australian War Memorial’s virtual memorial has a page dedicated to Frederick Barbour which lists additional biographical details including that he was born in Summer Hill in NSW on 23 March, 1895, which suggests that the Unknown Boys probably posed sometime before 1910, give or take a few years. To my eyes at least, he's no older than 15 in the Unknown Boys and probably younger although it's hard to tell.

More biographical information can also be found, strangely enough, on a Uniting Church website even though, when he enlisted, Barbour himself gave his religion as Baptist.

So what about the Toowoomba connection? And is this really a cricket team?

Both GP and EP Barbour have entries in the Australian Dictionary of Biography (although there’s no mention of FGP). George Barbour was well-known as the head of Toowoomba Grammar school from 1910 to 1935 and both his sons attended the same school. Frederick was school Dux in 1913-14 and won a scholarship to the University of Queensland before enlisting.

However, before moving to Toowoomba, George Barbour was also a master at Sydney Grammar School from 1888 to 1910, where his sons also attended, and it is more likely that this is when the photograph was taken... for the following reasons.

All three Barbours were keen cricketers. Barbour senior played club cricket in Sydney and was chairman of the Australian Cricket Board of Control in 1908-09. Eric played cricket for New South Wales and was selected to tour South Africa before the war intervened. Frederick captained the school team at Toowoomba.

Indeed, it is as members of a cricket team that we can find all three of them in the pages of The Sydneian school magazine, published by Sydney Grammar School, in the March 1910 issue posing as part of the 1st Cricket XI. Barbour senior is there, seated in the middle next to Eric, and there’s Young Fred, seated on the ground again at the front, looking maybe slightly older than he does in the Unknown Boys. 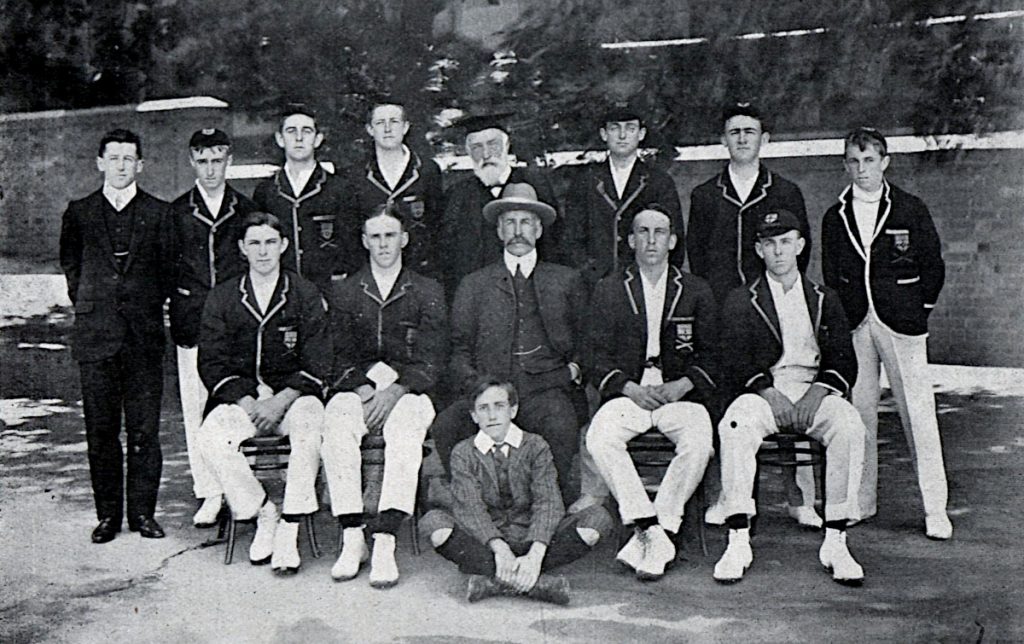 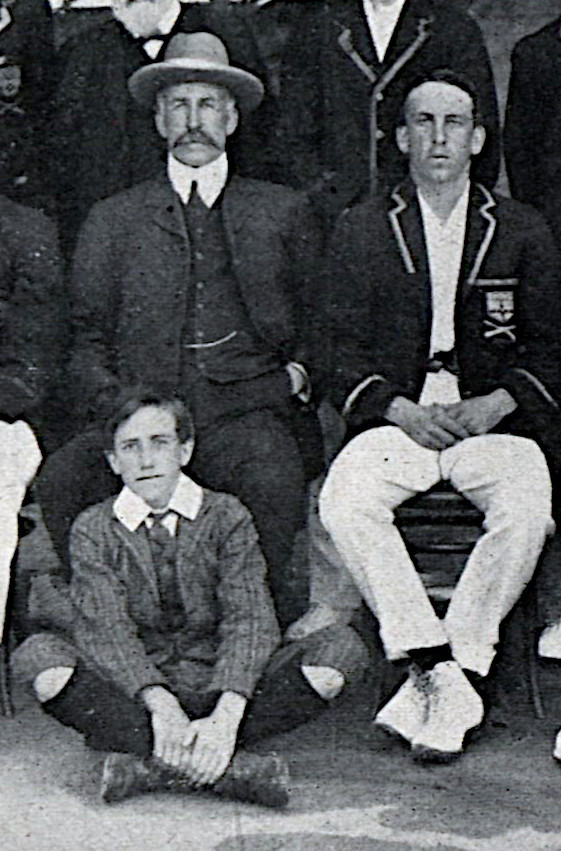 So maybe this is the link that ties the Unknown Boys together – not Toowoomba Grammar School but rather Sydney, and sometime before 1910 judging by the cricket team photo (Eric also looks older here than he does in the Unknown Boys).

There’s another clue in this issue of The Sydneian that the Unknown Boys are possibly alumni of Sydney Grammar School.

On the page before the cricket team, there is another sporting team photograph, this time of the Rugby XV. And there on the back row, third from the left, is an HB Ritchie who bears a distinct likeness to the HBR Ritchie of the Unknown Boys although, again, looking slightly older in 1910. 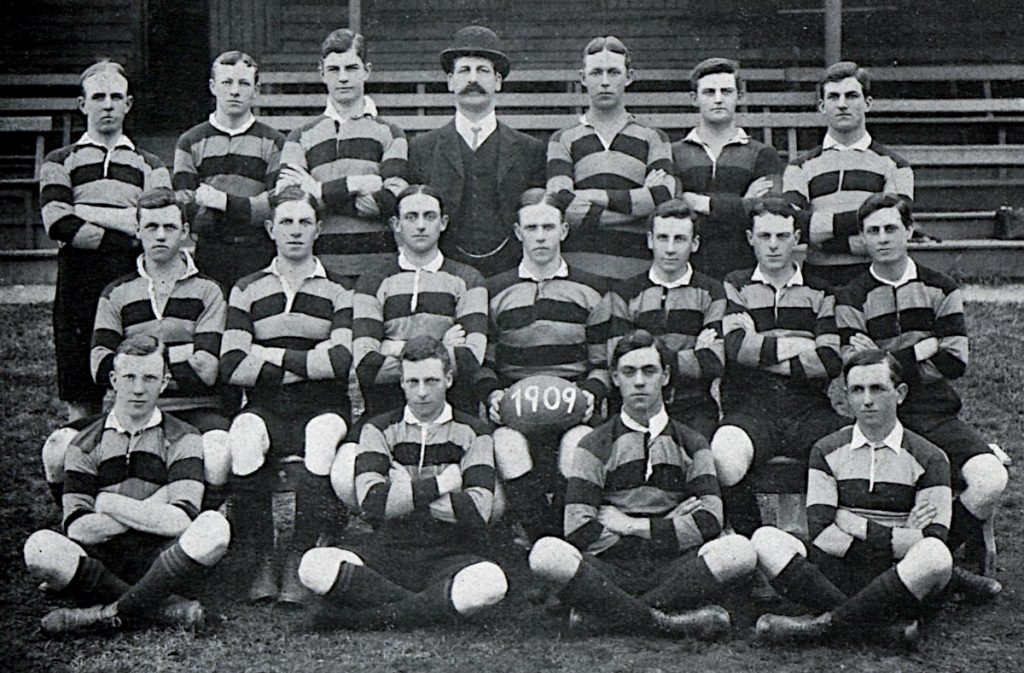 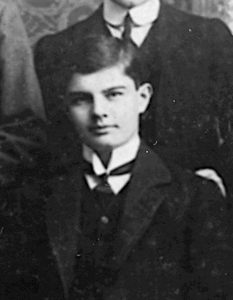 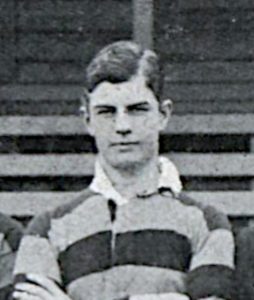 Could this be the same person? If so that makes three of the thirteen Unknown Boys at the same school at the same time. It seems that our winding path is leading us inexorably towards Sydney Grammar School.

Posted in People, The Unknown Boys.