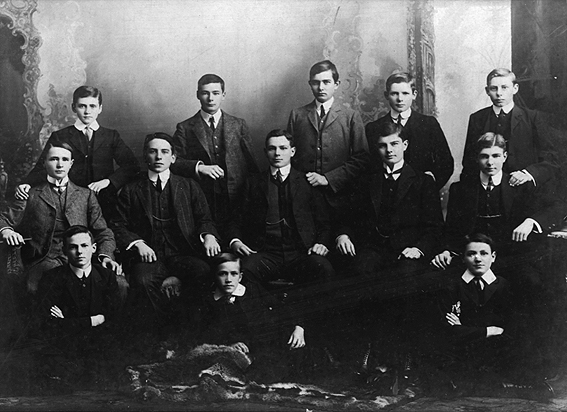 Let’s call them the Unknown Boys because, for the moment, that is what they are.

Some of them are trying very hard to look grown-up but their youth betrays them.

How old are they? Ancient, you might think. They certainly look old-fashioned and that, perhaps, makes it harder to determine their actual physical age at the moment when this photograph was taken.

They just look olden, and yet obviously youthful at the same time, their smooth, unsuspecting faces waiting to be stamped with a life’s-worth of vicissitudes and experiences.

Determining their real age is complicated by the fact that while some of them appear to be on the cusp of adulthood, others are barely into their teens. They could be any age, or all ages, and yet still they are boys, and not yet men.

There is a variety of clothing styles, different suits and collars, which again suggests a range of ages as the younger ones wait to out-grow their childish suits and progress towards more manly attire.

The seated ones in the middle row are all wearing watch chains, whatever that may signify.

They are merely a group of unknown boys then, such as can be found at any point in history, specific to this moment in time but otherwise lost in the vast ocean of human faces and lives and stories, never to be rescued.

And yet the photo persists, as is the way with old photos, keeping them gathered here for perhaps longer than they anticipated, preserving the record of their presence.

What brought them together for this sitting?

There are thirteen of them, enough for a sporting team perhaps, although the disparity in ages may weigh against that.

Perhaps it is a school photo then, although there are no badges nor insignia and no hint of a common uniform.

The fact of their grouping, their familiarity – posed or genuine – evokes a shared purpose, a bond that was once considered strong enough to record.

What we can observe or deduce is that they appear to be middle-class, white, Anglo, privileged, serious, perhaps a little too self-satisfied. Or maybe that is just their sense of assurance, an easy acceptance of entitlement.

I have been less than honest, however.

It is not true, for instance, that these lads are completely unknown because, on the back of the frame, written in neat copperplate, there is a list of names as follows:

Knowing this, the next question which occurs to me is whether the order of the names matches the positions in the photograph, like this: 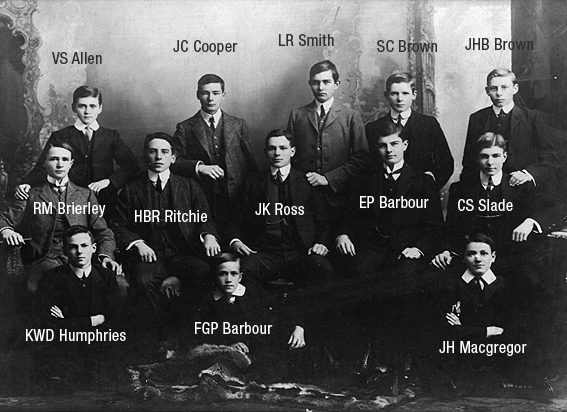 Or whether the names run from left to right in the photograph, like this: 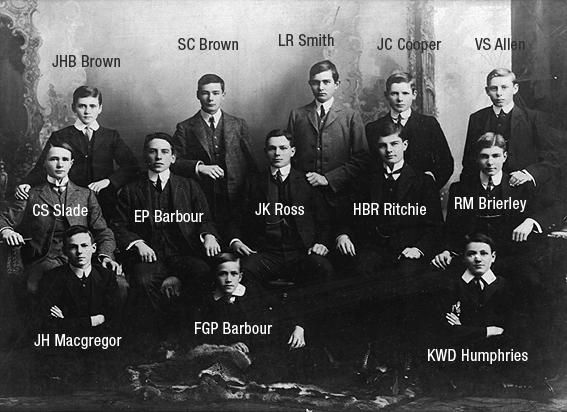 Either way, we can safely identify LR Smith, JK Ross and FGP Barbour from their stationary central positions.

As for the rest, I’m inclined to go with the latter ordering because, perhaps rather fancifully, I detect a familial resemblance between the two Barbours in this arrangement. 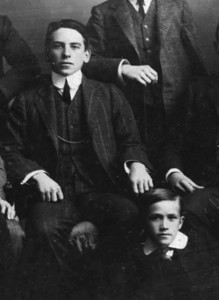 We know who FGP Barbour is because his position remains unchanged so my hunch is that EP Barbour is seated second from the left on the middle row, assuming they are related which, of course, they may not be.

There is be another easier possible solution to the questions of how and why and when all these boys were brought together. For instance, I could simply remove the photograph from the frame and see if there are any clues on the inside.

That would be straightforward, certainly, but it would involve destroying the backing and the frame and, to be honest, I’m not that eager to find out just yet.

Besides, doing a bit of detective work will be far more diverting.

Next: A particular friend of mine

Posted in People, The Unknown Boys.